jewelry for the future 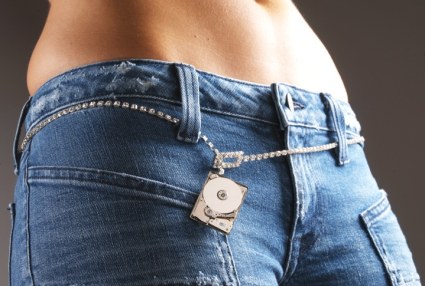 Occasionally the posts just write themselves:

While the ultimate fashion accessory of recent popular culture is flashy jewelry  known by its street name “bling” Hitachi Global Storage Technologies is today saying high-capacity, miniature hard drives are the new “bling” for their ubiquity and desirability among the consumer digerati.

We’re officially never using the word “bling” ever again. And we apologize for all our earlier abuse of the term. 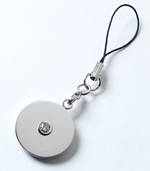 Hitachi really made a splash with their «Hard Drive is the New Bling« promotion, or contest, or campaign, or practical joke, or whatever it is. We all had a good laugh and the writers of Engadget swore off the word «bling» forevermore. But the tin-eared marketing pales next to the sheer wrongness underneath.

The pitch wasn’t really about bling at all, or even geek bling. I imagine what it said before Cory Coolhunter in Marketing got hold of it was, «We should tell everybody that the best portable electronic devices use Hitachi microdrives.» I think in the end that will prove to have been briefly true.

But microdrives are on the way out. They have no inherent advantages over flash (that I know of), so they only exist at a particular size tier as long as flash memory at that tier is significantly more expensive. This is surely obvious to everyone, except maybe to Hitachi — who don’t seem to make flash memory devices.

A 2GB CF card is now cheaper than a 2GB microdrive in CF form and the gap is narrowing at the 4GB level as well. The iPod mini and its hard drive storage are out; the iPod nano and its flash memory storage are in. Samsung has announced a 32GB flash memory chip that will enter production next year, and is aiming to start replacing notebook hard drives with flash memory as well. Meanwhile, Hitachi’s making jewelry.